Who are your top performers? The balloon theory

Recognizing top performers is vital: They need to be treated differently than the rest because they are special. Everyone is different, of course, but some are more different than others.

Performance is the ability of your people to do their jobs effectively and to produce the required results. Your employees who produce the results they are supposed to achieve in a consistent and timely manner are not simply doing their job, they are directly contributing to the top performance of your organization in a very positive manner. You should make an effort to recognize who they are. They are worth protecting.

The Balloon TheoryPeople acting together in groups should be moving in the same direction. Sadly, this is not always the case. Imagine each person in your organization is a helium balloon with a sandbag hanging from its string.

The helium, forcing the balloon upwards, represents the productive and positive aspects of that individual, including their intelligence and knowledge, their drive and effectiveness, etc.  The sandbag represents the person's weaker and more negative aspects that make it harder for them to perform well, including flaws in their personality, lack of education, low ethic level, or anything else that drives a hard-working manager to pull their hair out!

To extend this concept, you can bind several balloons together to form a cohesive group. That is now a picture of your organization. But an organization is composed of individuals. So what is the make-up of each of these individuals? What is the relationship between the helium and sand in each case?

An employee with much more helium than sand will move upwards — being productive and contributing to top performance. One with more sand than helium will not even lift from the ground, or, if already "airborne", they will tend to drift downwards — demanding to be supported by the more effective balloons in your organization.

As a manager, you probably spend very little of your management time on those people who get on with the job and produce top performance consistently. It is those employees who frequently botch it or produce substandard results that drain your time and cause most of the headaches in your job. How much easier would your job be if you had a higher percentage of people who just got on with it and did not drag your attention away from other operational activities?

The more individuals you have in this cohesive group with a good endowment of helium and with less sand than others, the better off your whole operation will be — an important factor when hiring.

Special Types of BalloonsYou won't find balloons with exactly the same force upwards as downwards. They rarely just hang in mid-air; they are usually going up or going down. And each employee is either helping the top performance of your organization or impeding it in some way. But there are two special cases.

The emotionally unstable person goes up and down like a yo-yo — extremely productive one day, apathetic and quite useless the next. There is a particular reason for this erratic behaviour.

The person with a convincing "public relations" front promotes themself as having almost no sand at all. The balloon looks terrific, all pumped up and sometimes quite colourful. But if you hire this person and tie them into the bunch with the rest of your balloons, you may find they have small hidden barbs that damage surrounding balloons so they lose their helium, reducing the power of the whole. Top performance goes out the window.

A Surprising FactIf you ever find, from one year to the next, that you seem to be having much more trouble in your team, chances are that you placed a new person in there who is actually bringing the others down. If you add a new balloon to the ones you already have, you want to make sure that it will help the whole system to rise. This means that you should not hire a balloon with too much sand or not enough helium. If you do, it will reduce the overall power of your organization, and your own top performance will diminish.

The surprising fact is that the reverse of this concept is also true. When you get rid of a balloon with more sand than helium, the whole system tends to move upwards to top performance again, even if you do not replace the ineffective employee immediately. If you cut loose one sand-heavy balloon, the remaining group will move up. So if you remove a person who is not contributing to the team effort, your action will benefit the productivity of the remainder. If you can also replace that person with an effective employee, that will be even better.

Far too often, however, we hear comments like: “I know that person is destructive or non-productive, but I have no-one to replace them, so we have to keep them on.” This is like saying: “I know this sand-ridden balloon drags the rest of the bunch down, but as long as I don’t have a replacement, I can’t afford to get rid of this extra weight”. The fact is, you can always afford to get rid of dead weight. And when you do, the rest of the group will produce better results, even before you replace the non-productive or destructive employee. Top performance is actually jeopardized by leaving them there.

We are not advocating that you rip through your organization and immediately sack everyone who is not performing. Due process must occur. But where you have identified someone who has legitimately qualified for off-loading, do not hesitate just because you do not have a replacement.

Categorizing EmployeesYou can categorize your employees into three basic groups:

The top 20% of employees make a big difference to your top performance. These are balloons with plenty of helium and very little sand, helping to push the system far up into the “sky” and compensating for the sandbags who are not carrying their own weight. These employees always get it right. They're the ones you can rely on, who can fix anything. And they never cause any problems or demand any of your management time.

In the middle, you find the 60% who are average producers. Their productivity depends on how well management handles them. These balloons need to be pumped up from time to time with motivation. Top performers don't need these extra shots of helium; the job itself is highly motivating to them.

On a sales force, out of five or six salespeople, one or two probably produce the bulk of your revenue. You do not need to spend more time with these top performers, encouraging them to do better. You devote your time and effort to the mediocre ones, who show promise perhaps but who seem to require your attention each and every month to keep them firing.

The least productive 20% are the erratic performers, "ups and downs" balloons. One day, they are really pumped up; but the next, their sandbags have suddenly increased in weight. Such unpredictable people are the source of nearly all of the organization's internal upsets and costly mistakes. They are also the ones who take most of management's time and attention. They are usually easy to spot, however, like the team member who did an excellent job one day, but the next never answered their phone or returned calls.

Protect Your Most Valuable PeopleThe balloons are at the very peak of top performance demand very little of your attention. However, if you neglect them, you risk losing them to a competitor.

Remember that people who produce top results are subject to attack by certain types of non-performers. If there is some sort of conflict, look at the performance level of the people involved and protect those who are actually producing good results.

What is performance? It is what produces an extremely healthy result for your company's profits, as well as for the general satisfaction and spirit of your whole organization.

Reprinted with the permission of Neil I. Clark, an author and performance management expert with extensive experience helping managers get out from under the treadmill. Performance-Managemnt-Made-Easy.com; OverworkedManager@bigpond.com The concept of team building is largely misunderstood in business today. Many organizations view team building as buying team hats, t-shirts and jackets, hiring motivational speakers to “pump up” the group... Leading from a distance: how to manage remote empl...

If it seems like more and more people are working from home lately, it’s because they are. The latest Global Workforce Analytics survey found an 80% increase in telecommuting since 2005. 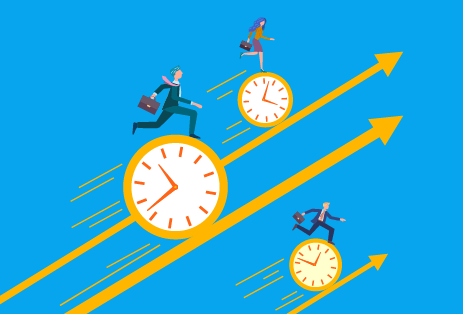 3 tips to speed up your recruitment process

Candidates now have a choice of work and an abundance of opportunities, with many interviewing for multiple roles simultaneously. To remain competitive in the modern market, recruiters and talent acquisition teams must be proactive and move quickly.